Animal Defenders International (ADI) and Loomus have condemned ‘The 100-year-old man who climbed out the window and disappeared’ for its use of an abused circus elephant. The film is directed by Felix Herngren and is released across Estonia on December 12th.

The elephant used in ‘The Hundred-Year-Old Man’ Vana Mana (also known as Wana Mana) previously featured in a shocking undercover exposé by ADI at the Great British Circus in the UK. Vana Mana and her companions Sonja and Delhi were beaten by both her trainer and groom and chained for long periods.

ADI’s horrifying footage prompted an outcry and the elephants and their trainer left the UK after just one season. Delhi, who was chronically lame, has since died. Vana Mana and Sonja remain with their abusive trainer, Lars Hölscher, touring with circuses across Europe. Their trainer now uses different names for himself and the elephants. 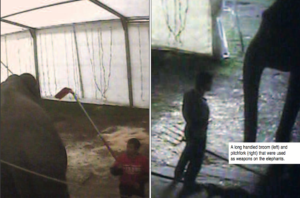 In Sweden last year, Vana Mana and Sonja – now known as Ghandi and Baby – were forced to perform by their trainer at Cirkus Skott. After their identity was discovered, Cirkus Scott announced that it would stop using wild animals.

In Estonia, there are concerns that plans to ban wild animals in circuses could be watered down, to prohibit only certain species like elephants, wild cats and apes. A similar proposal was suggested in Britain but discounted by the Government which has drawn up legislation to ban all wild animal acts. Regardless of species, the welfare of the animals is compromised by the temporary nature of the travelling circus, with severe confinement inevitable and physical abuse commonplace.
Despite legislative measures being taken by 28 countries around the world to prohibit such acts, the use of wild animals in circuses is still permitted nationwide in Estonia.

ADI President, Jan Creamer, “The Hundred-Year-Old Man bills itself as a comedy, but there is nothing funny about the shocking abuse of the poor elephant who features in it. Experts agree that the use of wild animals in the entertainment industry causes suffering. Anyone who cares for animals should avoid ‘The Hundred-Year-Old Man’ and other films that use live, performing animals instead of CGI.”

The film industry itself is increasingly turning the spotlight on the use of animals in entertainment – Seaworld is facing severe criticism for keeping captive orca following the release of Blackfish, and ADI’s inspiring rescue of 25 lions from illegal Bolivian circuses is charted in uplifting action-documentary Lion Ark.

ADI undercover footage of Vana Mana and other elephants abused at the Great British Circus:

ADI report on the investigation of the use of elephants at the Great British Circus in 2009 http://www.ad-international.org/media/GBC_Elephant_Report_F_2010.pdf

Expressen report on filming with Vana Mana (referred to as Ghandi in the article) http://www.expressen.se/kvp/snablar-vilken-tung-roll-for-cirkuselefanten

Animal Defenders International
With offices in London, Los Angeles and Bogota, ADI campaigns across the globe on animals in entertainment, providing technical advice to governments, securing progressive animal protection legislation, drafting regulations and rescuing animals in distress. ADI has a worldwide reputation for providing video and photographic evidence exposing the behind-the-scenes suffering in industry and supporting this evidence with scientific research on captive wildlife and transport. ADI rescues animals all over the world, educates the public on animals and environmental issues. www.ad-international.org

Loomus
The NGO animal advocacy organization Loomus aims to protect the rights and interests of animals, and represent their interests in social discussions. Primarily, Loomus stands for the animals used in agriculture, animal testing, entertainment and fur farming. www.loomus.ee