Altogether, the petition for banning fur farms gathered 1180 digital signatures and close to 9000 handwritten or e-mail signatures. This Friday, on November 21, the NGO Loomus will deliver the signatures and the respective registered letter to the Estonian parliament Riigikogu. 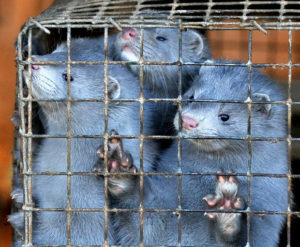 Kristina Mering, the NGO Loomus project manager, finds that banning fur farms in Estonia would be an important step towards the state’s more ethical behavior. “That is the reason why banning fur farms is a topical issue in other parts of Europe as well – about 10 countries have banned fur farms entirely or partially,” explained Mering.

Fur farms are banned in England, Northern-Ireland, Austria, Croatia, the Netherlands, Slovenia and Bulgaria. Fur farms are partly banned in Denmark, Switzerland, Sweden, Italy and New Zealand. Chinchillas, rabbits, minks and foxes are raised on fur farms in Estonia; also, dogs, cats, raccoon dogs, ferrets, beavers, coypus, squirrels, bears and other animals are raised for fur in other parts of the world. According to the research conducted by the Estonian marekt research company Saar Poll, more than half, i.e. 59 percent of the Estonian population, does not support raising wild animals on fur farms for the sole purpose of producing fur.