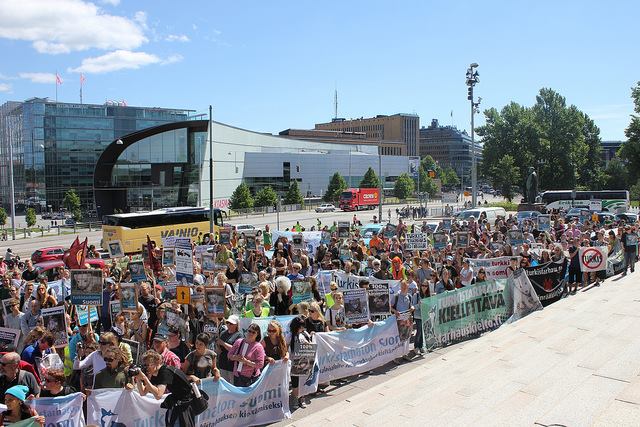 “We are participating in the demonstration, because the Nordic animal rights activists are working towards the same goal. With our joint forces, we are hoping to ban fur farms in the entire region,” noted Kadri Taperson, the manager of the NGO animal advocacy organization Loomus. “There is a particularly important reason for cooperating with the Finnish organizations: the owners of the largest fur farm in Estonia come from Finland,” explained Taperson.

From the Estonian side, the demonstration is organized by the NGO animal advocacy organization Loomus and the animal rights organization In The Name Of Animals (Loomade Nimel); and from the Finnish side, Animalia, Animal Eco, Luonto-Litito, Maan ystävät, Oikeutta eläimille, Sey Suomen Eläinsuojeluyhdistysten liitto, Vasemmistonuoret, Vegaaniliitto and Vihreiden Nuorten, and Opiskelijoiden Liitto.

PETA was founded in 1980 and the organization has more than three million members. Many celebrities, such as Joaquin Phoenix, Paul McCartney, Bryan Adams, Ricky Gervais, Alec Baldwin, Pamela Anderson, Iggy Pop and Brigitte Bardot belong to the supporters of the organization.

Gathering at the Senate Square on 21.5 at 15.30.
The parade will start moving at 16 and reach Kansalaistori Square, where the representatives of the Parliament will receive the petition for banning fur farms in Finland, at 17. Several local and international performers, including Kadri Taperson, the manager of the NGO Loomus, will also give speeches there.