The first animal rights conference in Estonia will be held in Tallinn on October 31. The conference keynote speaker is a well-known Finnish philosopher and activist Elisa Aaltola. 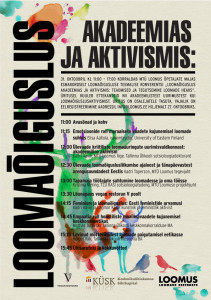 According to the conference project manager Kadri Aavik, animal rights movement has existed in Estonia for eight years. “However, in the past years, animal rights have gained more and more popularity all over the world, appearing in the forms of citizen initiatives, theoretical mindsets as well as an academic discipline,” explained Aavik. “Undoubtedly, it is a mindset that has both its passionate supporters as well as opponents, and a lot of myths surrounding it,” added Aavik.

The keynote speaker Elisa Aaltola is a Doctor of Philosophy, senior research doctor at the University of Eastern Finland and animal rights activist, who has published several books on animal ethics and animal rights. In addition to Aaltola, the speeches will be given by environmental ethicist Mattias Turovski, artist and feminist activist Dagmar Kase, graduate student of philosophy Holger Kiik, postgraduate student of sociology Kadri Aavik, executive director of Loomus Kadri Taperson and student of sociology Kristina Mering.

The conference “Animal rights in academia and activism: knowledge and actions for the sake of animals” will take place in Tallinn, in the Master’s Hall (Magistrihall) of the Tallinn Teachers’ House on October 31 from 11.00 until 17.00. The event is free of charge for all participants, but registration is required at info@loomus.ee by October 27.

The conference is organized by the NGO animal advocacy organization Loomus and sponsored by the National Foundation of Civil Society.

Abstracts and detailed conference program can be found at https://loomus.ee/konverents-loomaoiguslus-akadeemias-ja-aktivismis/